COWAN SYSTEMS has long treaded its own path when it comes to servicing its vehicles. Unlike most carriers its size, Cowan Systems chooses to outsource the majority of the work for its 1,000-plus truck fleet.

For the Baltimore-based company, which provides customized transportation packages as well as logistics and intermodal services for regional and national shippers, the choice of a trucking partner comes down to two non-negotiable factors: the reliability of the OEM’s vehicles and the capability of its service network.

“For us, the service aspect is huge,” says Dennis Morgan, chief operating officer of Cowan Systems. And that’s an area where International, which currently represents more than 65% of the Cowan fleet, has an advantage other truck makers can’t touch.

Cowan recently took delivery of the latest version of International’s flagship Class 8 product, a pilot version of the International ProStar® with N13 engine. Based on the initial reaction from drivers, Morgan expects a smooth transition. “We feel this new vehicle is going to be a really good truck,” says Morgan. “We’re still testing it, but we think it will stack up very favorably against trucks from other OEMs when it comes to fuel economy.”

According to Cowan’s director of maintenance, Mike Sizemore, the truck’s excellent visibility (both on the open road and when maneuvering around tight loading docks) and overall cab comfort are the features that drivers rave about most. “Without a doubt, our drivers really like these trucks,” he says.

For Morgan, his trust in International’s service network gives him the confidence to try new products. “Having a network as rich as theirs is a big benefit to us,” he says. “They probably have twice the number of facilities than any of their competitors.”

Much of that confidence is a result of Cowan’s relationship with its local dealership, Maryland-based Beltway International, and its dealer principal, Jack Saum Jr. “We’ve worked together for so many years—we have total trust in him,” says Morgan. “They have nine facilities in Maryland, and we drive all throughout Maryland every single day. But if something happens when our trucks are out of state, they have the whole International network behind them.

“The International dealerships work together as a team, and that works incredibly well for us,” Morgan adds. “Their trucks have performed. But if we run into an issue with our equipment, the folks at Beltway stop what they’re doing and rectify the situation as fast as possible. That’s what it’s all about.”

Cowan’s enrollment in Navistar’s OnCommand program, a dedicated package of services offered only by Navistar, has helped streamline Cowan and Beltway’s repair process. The system provides one source for a fleet’s service programs, making diagnostics and repair more efficient. “I love how OnCommand has virtually eliminated communication issues between parts and service,” says Morgan. “The concept is tremendous. No other OEM has anything like it.”

Saum attributes the success of the longtime relationship with Cowan to the collaboration that exists among International dealers throughout North America. “The relationships that we dealers have with each other, that’s been the biggest asset we bring to the table,” he says. “Those relationships have brought productivity and efficiency to Cowan’s business. Plus, our footprint of dealers matches up well with their routes—especially in a lot of areas where other OEMs don’t have a presence.”

For Cowan Systems, a proven fuel-efficient truck, backed by the attentiveness of a trusted local dealer, keeps their drivers confident while on the road. 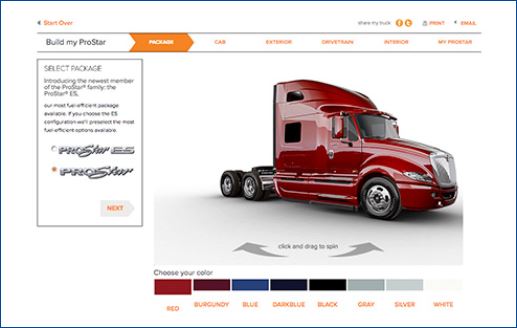