In the heart of North Dakota oil country, six-man crews and a team of International® trucks drill deep for black gold.

On a square drilling pad packed hard with orange-red “scoria,” or crushed rock, employees of Wyoming Casing Service have just parked two International WorkStar® trucks parallel and facing away from each other. They are beginning work on a conductor shaft, more commonly known in the oil business as a rathole—the pilot hole for the drilling operation that will follow it.

“If you asked them, they probably wouldn’t admit they were competing,” says Paul Keck, the tall, goatee’d rathole supervisor at the company’s Dickinson, N.D. location. Keck is something of an anomaly in the region containing the Bakken Formation, a massive oil deposit underneath southern Saskatchewan, Manitoba, the Dakotas and northeastern Montana. Over the last two years, the area has turned into one gigantic oil boomtown, drawing both experienced oilmen and unskilled laborers from all over the country eager for high wages. But Keck, who was born and raised in Dickinson, where Wyoming Casing is based, has the telltale accent of a true local and has worked for Wyoming Casing on and off for nearly 20 years. “We’re drilling dual wells, which leaves less of a footprint and has less environmental impact,” Keck explains. “So, since the crews are working side by side, they each want to be the ones to finish first.”

Working on the Fields

On the back of each WorkStar a derrick holds a Kelly, a 25-foot-long square shaft. Inside it are three more shafts that telescope out at successive depths. The goal today is 80 feet. The bit at the end of the shaft is massive, 26 inches in diameter, with some very serious-looking teeth. Though the bit spins clockwise with the aid of a Cummins 6.7-liter engine mounted in the center of the truck bed, Keck says the progress through the earth is due mostly to the 5,000-plus pounds of drilling weight pushing the bit downward.

Once the shaft is dug, a six-foot-deep by eight-foot-diameter cellar is carved out. This cellar will be the foot of the drilling platform that comes later. Next, a 40-foot pipe with a 16-inch diameter is picked up by the derrick and lowered into the shaft. Two additional 20-foot sections are then successively welded on and lowered. When the full 80 feet of pipe is centered in the hole, cement trucks pull forward and pour concrete around the pipe to set it in place. Perfect placement of the rathole is critical to a successful drilling operation. To get a productive well, the drillers may go 10,000 feet deep and another couple of miles horizontally.

As Keck shouts out the steps of the operation above the earsplitting din, it sounds as if the complicated process might take weeks. In reality, the Wyoming Casing crew has two days to complete the work and move on to the next site. “I have seven trucks running each day, five days a week, sometimes six,” says Keck, who got his start as a rathole driller. “Demand is very high in the Bakken. You almost can’t keep up some days, but you have to because there are a lot of companies vying for these contracts. If you don’t show up, someone else might.”

In its 35 years, Wyoming Casing Service has expanded from modest beginnings in southwest Wyoming to operations in the Dakotas, Oklahoma, Pennsylvania, West Virginia and other locales. Since the oil boom started in 2010, the company has gone from fewer than 100 employees to 750.

The company now keeps the 450-plus vehicles in its fleet moving at all times and, according to CFO Tim Gross, the overwhelming majority of those vehicles are International. “International vehicles hold up great in this environment,” says Gross, referring to the scorching summers and, especially, the brutal winters, when temperatures can drop to 40°F below, not to mention the rugged off-road application. “To provide the service needed on the 195 oil rigs we service, we make sure we have the best equipment in the business.”

A look around the remote rathole operation tells the story. In addition to the two WorkStar vehicles parked side by side for the drilling, two additional WorkStar trucks are outfitted with in-transit concrete mixers on their chassis, and one TerraStar® is hauling a 40-foot trailer that holds the massive bits and other heavy equipment. To say International is a presence at Wyoming Casing’s operations would be putting it mildly.

Barry Wegner is the general manager for Nelson International’s Bismarck and Dickinson locations. He’s been working with Wyoming Casing CEO Steve Halvorson since 2008 and has been the Casing company’s go-to guy when it comes to finding the right truck. “There are a lot of special circumstances with Wyoming Casing that require us to make sure we’re rigging the trucks up correctly,” he says. “Horsepower, torque, transmission, gear ratio and suspension—some need air rides, some need a spring suspension. It really comes down to the application.”

Gus Pech, a drilling equipment manufacturer, builds the drill rigs individually for each International. Each unit can take up to six months to complete, but the result is a rig that works completely in sync with the WorkStar.

There are no complaints from the drivers on the rathole site. Every operator says the power and torque—up to 475 horsepower and 1,700 pounds of torque in the new models—are more than enough for the jobs required. Dustin Butler, who has been with Wyoming Casing for over a year, was especially impressed with the WorkStar truck’s dual-powered steering gears and large front axle. “We mostly have flat country in North Dakota and Montana, but we also have ‘The Breaks,’ which are a series of rock outcroppings and steep bluffs that make southwest North Dakota very hilly. Sometimes you feel a little top-heavy with the rig in the back, but the International drives smooth.”

The other basic job that Wyoming Casing performs in oil country aside from rathole drilling is called “laydown,” when the company delivers large loads of pipe to an oil platform. Individual sections of pipe are hoisted to the rig floor, where they’re connected and lowered into the well. Wegner says the Wyoming Casing crews have been nearly ecstatic about the durability of the WorkStar cabs. Their one-piece doorframes and chip-proof wraparound windshields provide needed strength and protection onsite. In the extended cab configurations there’s a built-in bed—a necessity for the laydown drivers, who sometimes spend up to 48 hours on a drilling site.

The midsummer sun is still strong and hot when the two crews finish their holes within just 10 minutes of each other, and the WorkStar cement trucks back in to deliver their loads. The exhausted crews take a few minutes to relax before resuming a long list of tasks to prep the site for the next day. It’s a two-hour drive back to Dickinson. They’ll reassemble at Wyoming Casing by 7:00 the next morning for the commute back out to the site, where they’ll complete their work.

“Then it’s off to the next site,” laughs Keck. “These days on the Bakken, there’s always another site.” 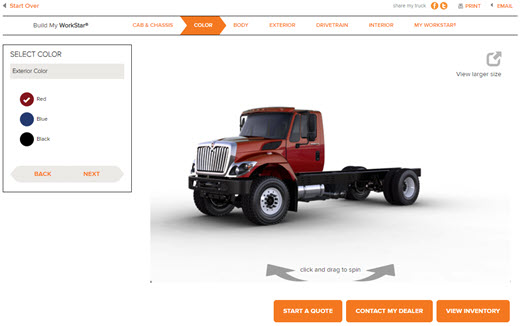