From the Bronx to Midtown, two men and a DuraStar® help quench the thirst of New York City.

It’s a brisk late-autumn morning in New York City, and the traffic is stifling. We’re less than a mile from Manhattan Beer Distributors’ buzzing, five-acre South Bronx facility—where the 10 service bays on our bright-green DuraStar® delivery truck have been carefully loaded with 200 cases of imported and American beers and enough craft brews to satisfy the savviest of beer snobs—when we slam into a wall of gridlock. Five lanes of rush-hour congestion crawl across the Third Avenue Bridge. An estimated 58,000 commuters traverse the Harlem River here every day, and right now it feels like that many vehicles and more are fighting their way southbound on a one-way mission into Manhattan.

“This isn’t so bad,” says driver Raymond Adames, cracking a smile as he turns the volume up on the salsa station blasting from his radio. “Sometimes the traffic is so terrible, it takes us over an hour to get to our first delivery.”

Adames and his sidekick—driver-in-training Angel Felix—don’t have time to spare. It’s a few days before Thanksgiving, one of the beer industry’s top-selling holidays of the year, and thirsty New Yorkers are waiting to stock up on suds for the long weekend. Fighting traffic to get product on the shelf is all in a day’s work for these inner-city warriors.

The largest single-market beer distributor in the U.S., Manhattan Beer supplies cases and kegs to bars, restaurants, hotels and retail locations across 17 counties, including all five New York City boroughs and the upstate suburbs. Founded in 1978 by entrepreneur Sandy Bergson, the company began as a specialty beer importer with a single 4,000-square-foot warehouse. Today the company sells more than 85 brands—mostly beer, but also wine and spirits—and boasts a total of 1.5 million square feet of warehousing space spread across its territories.

Nearly 300 trucks—more than 70% of which are Internationals—service 25,000 separate accounts across 6,000 square miles. The rigs that travel as far as the outer reaches of Long Island regularly clock 200 miles every day. The routes for city delivery trucks rarely exceed 15 miles, but they are demanding miles, to say the least, marked by constant stop-and-go traffic and a myriad of other hazards that come with the territory when you’re transporting precious golden-hued cargo into the heart of North America’s most densely populated urban center.

Adames and Felix have only 14 stops on their route sheet today, but they’ll have to hustle to hit them all before nightfall. As we bounce down Second Avenue through the gritty Upper East Side, our vehicle is immediately surrounded by a sea of yellow taxicabs that are taking turns darting recklessly in and out of our lane. From my perch high in the cab, the view out the DuraStar’s expansive front windshield looks like a real-life video game as Adames skillfully dodges bike messengers, pedestrians and never-ending construction zones.

“People will walk right in front of you,” he says. “You have to be alert all the time. This is how I drive every day: slow and steady.”

While the traffic is a constant grind, even tougher than that is the endless search for parking in this bustling metropolis. There are no loading docks at the pharmacies and small groceries that make up the majority of Manhattan Beer’s midtown stops, so delivery truck drivers must fight for highly coveted street parking like the rest of us. The biggest difference: You try parallel parking a 35-foot-long beast of a machine without scratching any bumpers.

We circle Third Avenue and eventually toss on the hazard lights in front of our first stop of the day, an outpost of a local specialty supermarket chain. Adames and Felix hop out of the cab, load up two hand trucks with cases of beer and hustle across the sidewalk to the store’s small side receiving entrance. The quicker they can get in and out, the less chance a traffic cop will slap them with a parking ticket or—the worst of all situations—tow the truck away.

According to Juan Corcino, Manhattan Beer’s fleet manager, run-ins with the law are inevitable when making city deliveries. The company factors a sizable amount into its annual budget for parking infringements. “We instruct our drivers not to block bike lanes and not to park near fire hydrants, but sometimes that’s just about impossible,” Corcino explains. “Everywhere you park you get a traffic guy or police officer coming after you.”

Maneuvering a truck around the streets of Manhattan is no walk in Central Park. Adames demonstrates the difficulty as he threads the needle turning onto an industrial stretch of 59th Street in the shadow of the double-decker Queensboro Bridge. Corcino says it’s precisely this ability to navigate the narrow and congested streets of midtown that gives the DuraStar an edge as an urban delivery truck.

“The International trucks have the best turning radius out there,” he says. “Our drivers are really happy to have them. We used to have problems with our other trucks, where they’d have to back up against traffic to make a turn. When you’re driving the streets of Manhattan, you don’t have much space to work with.”

The bulk of Manhattan Beer’s midtown customers don’t have much room for long-term storage either, so trucks have to make frequent stops to fill store inventories, in many cases with daily deliveries. To keep their customers happy, reliability is key. If one of these trucks breaks down, the party’s over for everybody.

“We guarantee next-day delivery. It’s my job to make sure that happens,” says Corcino. “International has been a reliable truck for us. We’ve been with them for 30 years and haven’t had any major issues.”

Even amid the constant horn blasts that accompany his work, Adames, 37, remains upbeat during his deliveries. A stocky guy with a buzz cut and an easy laugh, the 13-year veteran behind the wheel knows these congested streets better than anyone. Manhattan Beer utilizes sophisticated “dynamic routing” software to modify truck routes and load capacity based on changing traffic patterns and road closings owing to parades or other special events, but it’s skilled drivers like Adames who keep the deliveries running smoothly and efficiently.

Adames takes great pride in his work and the image Manhattan Beer presents to customers and the greater community. He greets store managers with a smile and waits patiently as each case of beer is scanned for inventory. Halfway through his shift, he pulls out a bottle of glass cleaner and sprays down the platter-size mirrors that serve as his extra sets of eyes out on the road. “Now I can see everything,” he says. “Visibility is very important when you have people crossing the street. It’s all about safety.”

“I keep my truck very clean. A lot of [my co-workers] will tell me, why don’t you just take it home with you?” he says with a laugh.

There’s a reason Adames is entrusted to operate this green machine. The regenerative braking technology on the hybrid-electric is ideal for the never-ending stops and starts of inner-city driving, which require the skills of a careful and competent driver. Plus, he’s the ideal employee to steward the truck that is the flagship in Manhattan Beer’s alternative-fuel fleet, which also includes a high percentage powered by CNG (compressed natural gas).

“Along with the fuel savings, the hybrid presents a great message to the community. Plus, it’s so quiet you can barely hear it on the street,” says Corcino. “People always ask about the truck, and we tell them: We’re delivering beer, but we’re also delivering clean air. 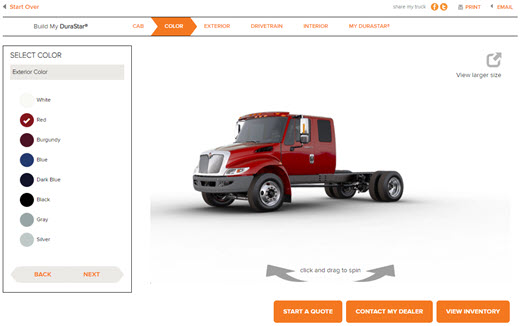